The roadmap for LoadRunner 12 was presented at HP Discover Barcelona in December last year. Since that time, I’ve been lucky enough to have a beta copy of LR12 for evaluation purposes. Now that the product has been released, I’m able to share some of the new features that I’ve found to a wider audience.

Cloud-based load generators. HP describes this feature as “cloud bursting”. Users now have the ability to provision load generators on AWS (Amazon Web Service) cloud servers from within LoadRunner or Performance Center. As well as this, the ports used to communicate between LoadRunner components such as Load Generators, Controllers, MI Listeners are user configurable through the new “network security manager” tool. This simplifies the setup process and allows more flexibility in distributed test networks or cloud-based test environments.  It is even possible to configure different ports/proxies for each Load Generator.

Licensing – 50 vUsers free
We in the user community have been asking for this for a long time. Providing fully-functional applications that allow small-scale testing allow prolonged evaluations and proof-of-concept exercises. This is great, because it allows more people e.g. developers to get hands-on experience and see the potential benefits of using LoadRunner.

This is likely to improve the adoption rate for LoadRunner and prevent the erosion of market share to low-cost / no-cost providers of performance testing software.

All protocols are included in the “community edition” license, with the exception of GUI (UFT) and COM/DCOM protocols as well as those protocols in the “template” bundle (i.e. those vUser types whose scripts are manually created (rather than record/replay) such as C# .Net, VB .Net vUsers).

VUGEN improvements
There are a variety of improvements as you would expect. Key ones are:

There are numerous other improvements which are well documented in the “About LoadRunner” section in LoadRunner help. Now that the community license is available, there’s nothing stopping you from downloading it and giving it a go.

– reproduced from my Trust IV blog article at:
http://blog.trustiv.co.uk/2014/03/first-look-loadrunner-12#sthash.pmwREa11.dpuf

On Thursday 6th December at HP Discover in Frankfurt, Jason Kennedy, Martijn Stuiver and I were asked to discuss how Vivit is changing from a primarily US-centric, practitioner-focused user community to one which helps support our members as the IT world changes around them.

The interview covers the changing demographics of the Vivit user community, how we plan to alter our content to suit our membership, our development of new social media channels, the growth of our membership as well as the development of new special interest groups such as “Cloud Builders” and “Security” alongside our existing special interest groups.

For more information and to join the Vivit community (it’s free by the way), go to
http://www.vivit-worldwide.org

Last week I can across this article by Stuart Moncrieff who looks after the myloadtest.com website.
http://www.myloadtest.com/loadrunner-syntax-highlighter/

In this article Stuart describes how he wrote a php file for GeSHi (Generic Syntax Highlighter) which highlights LoadRunner C code using the same colours as vuser generator. This has been something that I’ve wanted for ages. Whenever I do documentation describing a script, I often want to paste it into my Word document, PDF or website using the same colours as LoadRunner.

Once Stuart wrote the syntax file, I decided to give it a go. I installed it on my site and modified the sample GesHi page so that LoadRunner was the default language type. It took no time at all thanks to the good documentation provided by Stuart and the developers of GeSHi.

The finished results can be seen here – http://bish.co.uk/geshi/example.php
Simply paste your LoadRunner code into the empty text box and click “submit”, GeSHi does the rest for you.
If you wanted to, you could choose a different language from the drop-down list to format the code in colours relevant to a different programming language such as COBOL, delphi, java, html, php or the other languages supported by GeSHi. 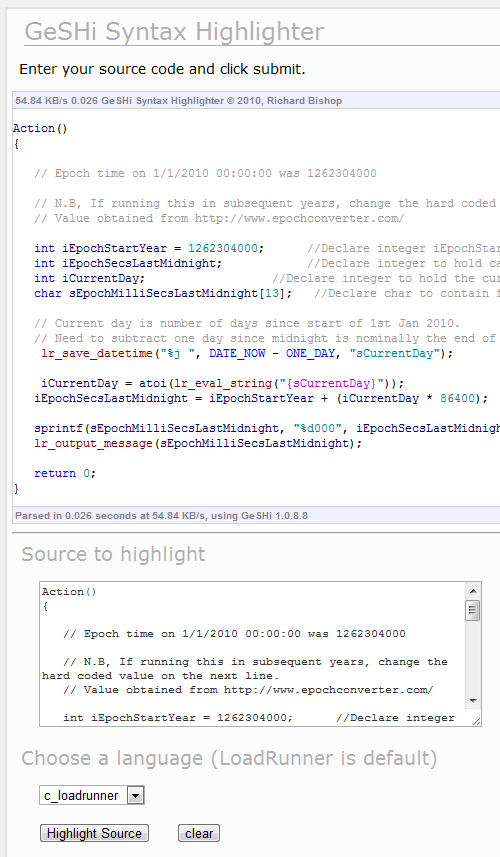