The recent riots in Britain have opened the public’s eyes to the UK courts’ sentencing system in a way that politicians have never been able to.

As many motorists find to their cost, if you have a job and go through the courts, you are normally more heavily punished than somebody on benefits. This is to ensure that people are punished according to their means. As an example, consider two motorists. One is claiming benefits and lives in council-provided accomodation. The other earns the average wage (£499 per week according to the ONS). Both commit the same speeding offence, 38mph in a 30mph zone. The Magistrates Sentencing Guidelines (see page 131) say that this should merit a Band A fine and 3 penalty points on each of the drivers’ licences.

The employed defendant therefore pays £350 and the benefit claimant pays £150 for the same offence. To a certain extent this is fair, but what happens if they were both convicted of a further offence a short time later?

Let’s assume that they are convicted of a second similar offence the following week and neither has had a chance to pay any of their previous fine. Assuming that the second court appearance warrants a Band A fine, the employed person now owes £700 and the person on benefits owes £300; but that’s not how it works.

If you’re supported by benefits, the courts have determined that you can only pay fines at a rate of £5 per week. This amount is deducted from your benefits before they are paid. Effectively the DWP makes a direct payment to the courts service to pay the fine. Fines for benefit claimants are limited to a total of £260 to ensure that offenders on benefits aren’t saddled with long-term debts to courts which could result in more criminality.

To ensure that the £260 limit isn’t breached, £40 will be “remitted” from the amount due to the court. The benefits claimant is now effectively at the limit of what he can owe the court. Any subsequent fines from the court will also be remitted, so he’s effectively purchased a “get out of jail free card” for his weekly £5 payment.

This explains how people appear to go unpunished despite repeated court appearances. The BBC reported today, “Matthew Chin, 18, of Darville Road, north London, who has been before the courts 21 times but has never received a prison sentence, was warned he was going to jail.” I don’t know Mr Chin’s criminal record, but records like his are commonplace. Provided that offences are seen as minor and relate to shoplifting, minor drugs offences, motoring offences or disorderly conduct, they’re likely to remain at liberty despite regular court appearances. Criminals have learnt that they needn’t fear the courts or the police. 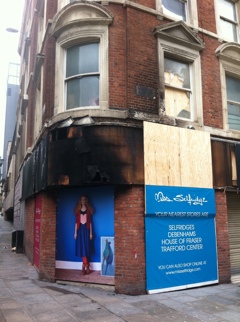 I’m appalled at the riots, but if the sentencing policies which continually fail to punish wrongdoers are finally being drawn to the attention of the public at large, perhaps some good has come from them. My only concern is that we’ve gone from too-soft to too-tough and we may never find a “happy medium”.

Right, time to put my cards on the table. I’m happy to say that I’m a conservative voter and that I support the government (even with those liberal hangers-on). Having said that, what a fool David Cameron is if he thinks that we should tolerate the UK intelligence services and the police having the ability to disable social networks during times of social unrest. Apart from the technical difficulties that he’d face, taking such steps would alienate the law-abiding majority and prevent social networks from being used for good.

If DC decides to shutdown FaceBook or Twitter, people will simply switch to Google Plus or PingChat. He can’t block access to every method of communication via the Internet and he’s deluded if he even thinks he can. The whole reason Blackberries are banned in parts of the Middle East is because the messages are routed through RIMs servers in Canada and are outside the control of the despotic regimes that try to control them. The Twitter hashtags #riotcleanup and the @shopalooter account demonstrate that social networks can be used for good as well as bad.

If DC wants to regain the public’s confidence he needs to ensure that the deterrent effect of long custodial sentences hangs over people who indulge in mob violence and he needs to ensure that the criminal justice system in the UK delivers custodial sentences when appropriate that are both punitive and rehabilitative in nature. Short sentences offer neither punishment, rehabilitation or protection for the public.