My son came home from school today to show me a funny Trump-related website. Apparently it’s all the rage at school.  The website lets you blow a Trumpet in Donald Trump’s face. There’s a trumpet noise and a funny animation of the President-elect’s hair blowing. I can see why this is popular in schools and (probably) workplaces…. it’s disrespectful and childishly funny.

The site (trumpdonald.org) has been developed by a Swedish Ad Agency called Animal and it’s obviously captured the world’s imagination in the last day or so. Their website hit counter is at over 100 million hits and I just had a look at the site, only to see a HTTP 503 (Service Unavailable) error.

These (earlier) images are from the Daily Telegraph. In their article which was published on 7th November the site had 9 million “Trumps” (hits) 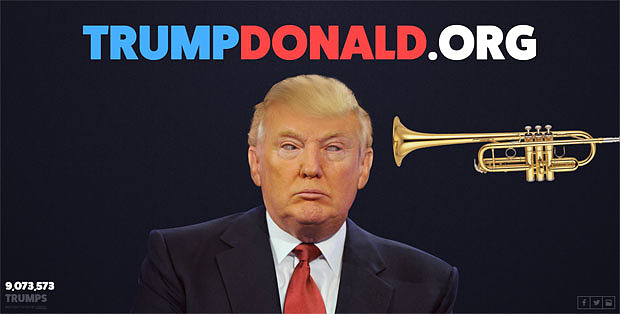 The site has more than 100 million hits now (10th November) and the counter is still rocketing upwards, have a look if the site’s not melted yet under load…..

Last weekend, I had an interesting exchange on FaceBook. As well as a few “likes” or “thumbs up”, I had a reply from a friend who is generally left-leaning. She included an image of a Union leaflet  explaining the Unite Union’s reasons for wanting to stay in the EU.

The Unite Union is claiming that the EU is responsible for 10 benefits that British citizens have in the workplace, these include Health and Safety legislation, equal pay law, protection against discrimination, parental leave, sick pay and more.

The more recent legislation (European Social Chapter) came primarily from Tony Blair’s government in 1997 and under the Cameron/Clegg coalition in 2010.

Addressing some of the points that Unite makes:

Workplace safety – The 1977 or 1996 Safety Representatives and Safety Committees Regulations Acts, are protected in British, not EU law.

The European Social Chapter – When the Social Chapter was enshrined in EU law (by the 1991 Maastricht treaty) the UK opted out. Personally, I think that this was a mistake, but it’s wrong for Unite to claim that the EU is responsible for putting these employment rights into British law. Tony Blair’s government did that in 1997. Nobody on the “Brexit” side is suggesting that we should repeal these laws.

Equality – The 2010 Equality Act is enacted in British, Not EU law and although it incorporates some EU rules into British law, many of the laws brought about as part of this act are updates Harold Wilson’s laws from the early 1970s, many of these original laws were brought in before we even joined the EU.

Equal Pay – The Equal Pay Act of 1970 was the first attempt to provide pay equality based on gender (this came in before we joined the EU). Despite this law and subsequent EU rulings on this subject there is still a significant disparity between the money that women earn compared to men. This chart shows the significant gender pay gap that still exists in Europe. For this reason, it is wrong to claim that the EU guarantees equal pay. http://ec.europa.eu/eurostat/documents/7116161/7188977/1305EN.pdf

Holiday Health Cover – the “Healthcare on holiday” protection comes from the EHIC card. This is due to the UK’s membership of the EEA (European Economic Area) and has nothing to do with the EU. Both Switzerland and Iceland are members of the EHIC scheme even though they aren’t EU members.

I find it hard to believe that Unite is campaigning to remain a member of the EU. With the TTIP legislation on the horizon which will erode workers rights and according to CEPR projections increase EU unemployment by 1.3 million, I would have thought that this is just the thing that Unions should oppose.

Tony Benn sums up the EU for me. Fundamentally undemocratic and heading in the wrong direction. It isn’t the good things that the EU may or may not have done in the past, it’s the bad things that they are planning to do in the future that worry me. That’s why I want out.

Since I wrote this blog, Dan Hannan (MEP and prominent Eurosceptic) tweeted this. It shows the supposedly independent groups including the OECS, IMF, IFS, LSE who’ve all benefited from EU funding.

It seems that the Unite Union is also on the list and received €285,000 funding from the EU. It appears that, “EU who pays the piper calls the tune.” 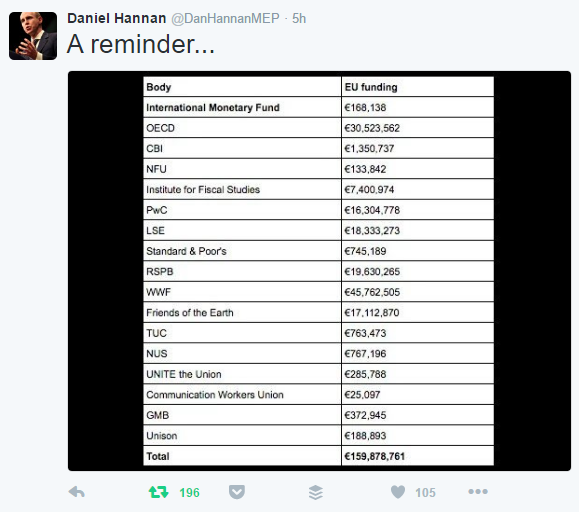 Some political leaflets dropped through the letterbox today and I was initially angry and then dismayed by what I read. The local Labour group in Rossendale is complaining that they get less funding than wealthier parts of Southern England. They used this graphic to demonstrate the shortfall.

The headline grabbing statistic is that Surrey received 100x more funding that Rossendale. Even the more dim-witted parts of the electorate should be able to see that Rossendale (the tiny red-coloured speck in the North) is significantly smaller than the Surrey (the large blue blob in the South).

I don’t mind receiving information through the post, I like to keep well-informed. Sadly the above image isn’t designed to inform the electorate. I’m insulted that the local Labour group thinks that I’m stupid enough to take it at face value.