I’ve been toying with the idea of backing my PC up to “the cloud” for some time now. I’ve used Google Drive, DropBox, OneDrive and other cloud based storage before, but what I really want/need is a proper backup.

By that I mean something that I don’t need to think about and just does it’s job. I’m not looking for the ability to sync data across devices (I can use Google / Dropbox / OneDrive for that. All I need is reliable (ideally off-site) backup.

A few years ago, I read the BackBlaze blog, “PetaBytes on a budget” and based on this, even toyed with the idea of setting up a similar service in the UK. This remained a pipe dream after I found that they were already planning to launch a UK service themselves.

Fast forward to now, I installed BackBlaze last week and subscribed to their “backup all you want” for $50 per year. Even with the pound at the current low, that’s less than £40 per year! 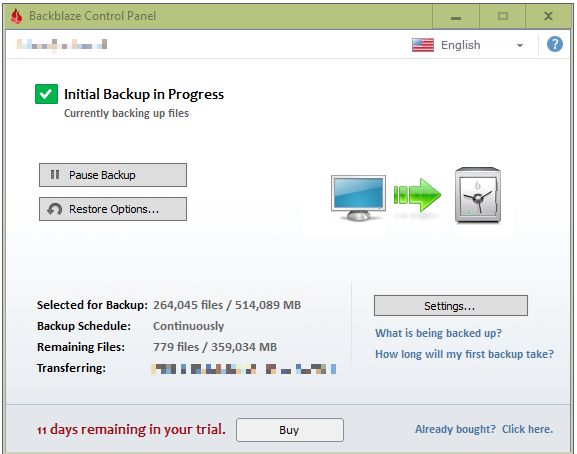 Although it took about 8 days to do the initial backup over fibre broadband, now it happily runs as a background service and I don’t have to think about it any more. I just wish that I’d done this sooner.

If I need to restore a file or folder, I can just download it or I can order a HDD or USB stick with my entire backup on it directly from BackBlaze.