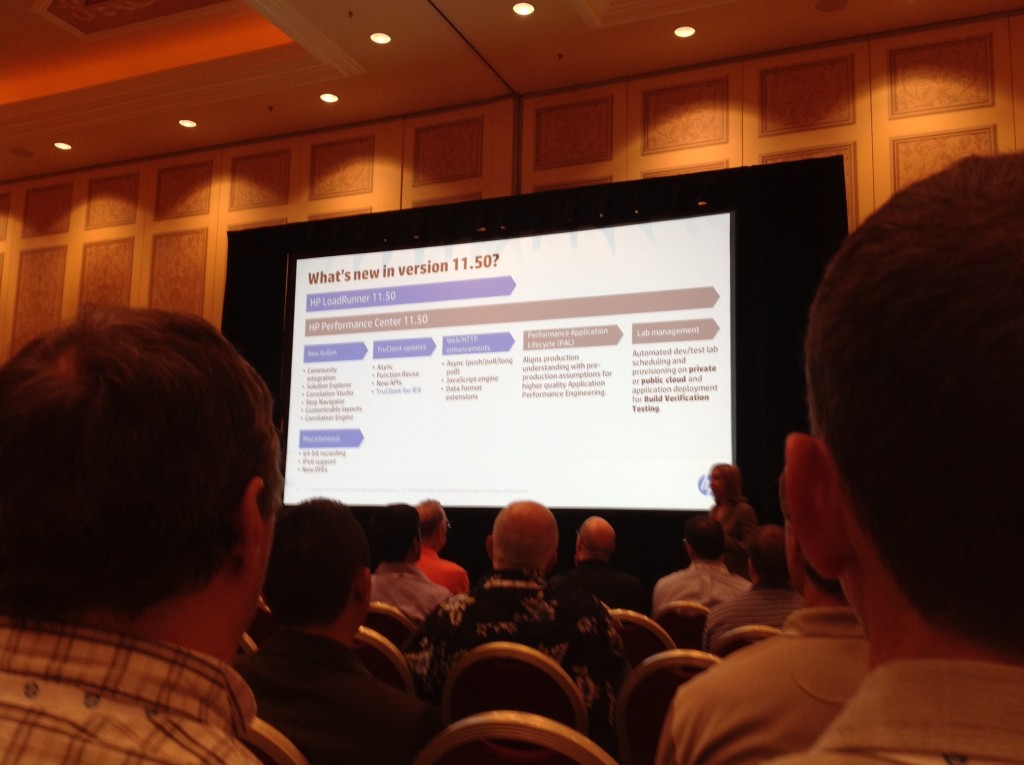 *Whilst the new mobile recording engine is useful, I can’t help but feel that HP has scored an “own goal” in marketing terms. A number of their competitors are making lots of noise about their ability to test mobile applications and this announcement implies that HP are only just getting their act together on mobile testing. HP has been able to test mobile (and many other) applications via a proxy recorder for as long as I can remember and I’ve been using LoadRunner since 1999. This is new proxy recording engine undoubtedly makes scripting easier but it isn’t their first foray into mobile testing and their competitors are disingenuous if they try to make that claim.

Future trends
64-bit VuGen
One customer asked about whether HP had any plans for 64-bit VuGen or Load Generators. Shane Evans said that they didn’t perceive particular demand for this especially since load generators could each spawn multiple 2GB processes for load generation but that they would consider this if there was sufficient customer demand.

Diagnostics tools
Only one customer was using HP diagnostics and two or three others were using Dynatrace or other diagnostics/profiling tools like Wily Introscope. I would be very surprised if network simulation and application diagnostics weren’t significant growth areas for specialist testers in the coming years. These products add significant value to testing engagements and are becoming more important as users become more mobile and applications are increasingly hosted on virtual platforms where performance optimisation is more important.

VTS2 – Virtual Table Server
Shane then did a small demonstration of VTS2. I was a big advocate of the original VTS (virtual table server) and since it’s demise I’ve looked at various ways of managing test data in scripts (such as using MySQL) . VTS was always an unsupported add-on (originally written by Mercury engineers) to allow parameters to be passed from script to script. This worked well but had a number of limitations. As well as being “technically” unsupported, the database had to be loaded with parameters from a CSV file before tests and you had to remember to save the “database” to a file each time that you shut it down.

VTS2 doesn’t have these limitations. It is based on the Mongo NoSQL database and can handle up to 2000 txns/sec easily (I can’t wait to try this properly). Media for VTS2 comes with LoadRunner 11.52 or is downloadable from HP SSO.

LoadRunner 12.0 ?
Silvia mentioned the fact that there were so many new features, some people within HP felt that this could merit a new major version number rather than simply adding 0.02 to the last release. This reminded me of Stuart Moncrieff’s summary of 11.50 last year. Having seen the new features, I think that she’s probably right, LoadRunner 12.0 and Performance Center 12.0 are probably already here 🙂