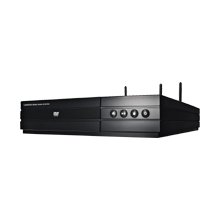 For the last few weeks, I’ve been having problems with my Linksys Media Extender. This has been causing me a great deal of grief because this is the only method currently of watching TV in bed (I have a Windows 7 Media Center PC in the front room and serve recorded TV as well as the satellite feeds up to the extender in the bedroom).

I’ve noticed that occasionally the Media Center Extender freezes up and becomes unresponsive to the remote control. I replaced the batteries in the remote (twice) but the problem remained. The Extender would happily continue displaying the channel that I had started watching but wouldn’t allow me to change. Occasionally I’d come back to the Extender to find that the screen was blank and the extender was unresponsive.

Restarting the Extender has always temporarily resolved this issue, but in the last few days, the problem has become more acute and the extender has generally only remained stable for a few minutes before crashing again. Since nobody is manufacturing extenders any more (until Ceton releases their new media center later this year) , this could have meant that I needed to drop an aerial into the bedroom and lose the ability to watch recorded TV.

Trawling the Internet for clues to the problem I came across this article, which although it was 2 years old and written in the US, gave me a nugget of information which fixed my problem.
http://experts.windows.com/frms/windows_entertainment_and_connected_home/f/116/p/95097/496301.aspx (Sadly not there anymore….)

It appears that the extender tries to connect to a Cisco or Linksys server to obtain an update. Since support for this product has now been withdrawn it is likely that the server is now offline. My theory is that the problem hit US users a few years ago and perhaps only recently has the same problem surfaced in my region when the UK/European regional servers were decommissioned.

My connection was wired, but I presume that the same steps could be used to fix a problem with a wired DMA2200 (or DMA2100) extender.

This prevents the extender from accessing the internet and then crashing when it fails to find the relevant update servers.