If you’re a user of social media, you may have heard of the social media tool called Buffer. In case you haven’t, it’s basically a sharing and scheduling tool which “buffers” outbound tweets and then sends them  in the future. I use it for Twitter, but it can also be connected to Google+, FaceBook, LinkedIn and so on (if you have a premium account)…. For me the free one works just fine.

Buffer differs from other Twitter scheduling apps because you don’t have to manually schedule tweets, you set a timetable for when you want tweets to go out and Buffer automatically tweets at the predetermined times.

You can fill your buffer in a variety of ways:

This is great and I’ve noticed more activity and engagement from my followers since I used Buffer. Unfortunately, I couldn’t think of a way to populate multiple Twitter accounts without paying for the premium version….. until now. 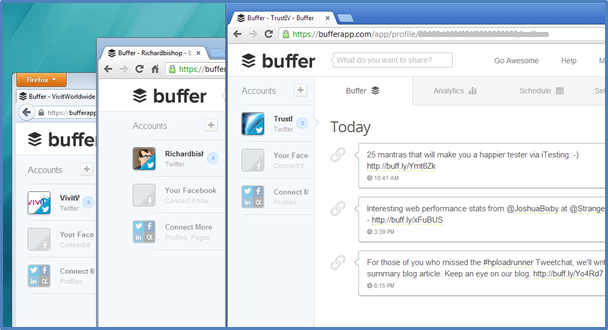 As you can see from the screenshot above, I have access to three Twitter accounts. My own account @richardbishop, my company account @TrustIV and the @VivitWorldwide account. By logging into Twitter in three browsers, I can stay connected to each of them and use the different plugins to populate my Buffer.

In the screenshot above, I used Chrome, Chrome Canary and Firefox and installed the Buffer plugin in each of them. This allows me to paste Tweets between the browsers if I want the same message in multiple accounts or post to individual Twitter feeds if I want to. Each of my accounts has a different schedule and it is possible to share my non-personal Buffer account with the other users of the @TrustIV and @VivitWorldwide Twitter accounts.