The campaign to save the X8 service via Edenfield to Manchester seems to be gathering momentum. We now have over 120 signatures on the online petition. If you still haven’t “signed”, you can complete the petition below.

Last week I took a picture of fellow passengers as we waited to board the X8 at the Rostron’s Arms stop in Edenfield. 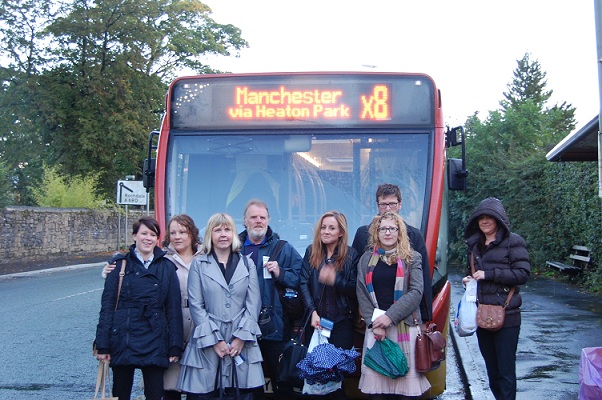 The picture and an accompanying story was published in the Rossendale Free Press.

Possible alternative to X8
A fellow passenger, Jenni Scott, suggested that perhaps Transdev could run the X44 service through Edenfield again if it terminated in Shudehill rather than Chorlton Street. If this were the case, the time lost travelling through Edenfield could be made up by avoiding congested Prestwich and Broughton as it travelled into Manchester.

X8 faster than current X43 service
This seemed like a sensible idea to me so I looked at the X8 and X43 timetables for rush-hour. After looking at the timetables for the current X43 and X8 services, I realised that the X8 takes an average of 45 minutes to get from Rawtenstall to Shudehill and the X43 takes 57 minutes to do a similar distance from Rawtenstall to Albert Square. This shows that the via Edenfield-Cheetham Hill route could potentially be faster than the conventional route via the Edenfield by-pass and Prestwich.

Email sent to Transdev
I sent an email to Russell Revill, the managing Director of Transdev plc and suggested that a regular X44 service on the new route could prove very popular for commuters, offering a faster journey time to Manchester and a terminus in the Northern Quarter of Manchester. I suggested that a service departing at regular, perhaps hourly, intervals would encourage greater passenger numbers and potentially offer Transdev two profitable routes into Manchester.

Mr Revill agreed to take this suggestion to his board meeting on Friday and let us know the outcome of this discussion. Whilst this isn’t (yet) great news, hopefully it shows that Transdev is prepared to listen. I for one would be delighted if this resulted in a better service for Edenfield and surrounding areas.